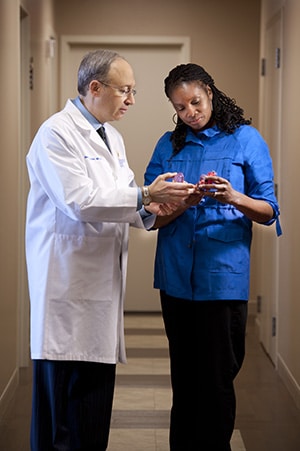 WHAT IS A PFO?

Everyone is born with a hole in their heart connecting the two upper heart chambers called atria. This connection is beneficial while the fetus is in the womb but in the real world it could lead to significant medical problems. Fortunately, in most people, this hole closes within several days of birth. In about 25% of the population this hole does not close completely. This is called a Patent Foramen Ovale (PFO).  In most cases, it does not cause problems.

Some individuals may form blot clots in their legs or pelvis. These clots can move from the leg and go through the blood stream to the heart. From there it can go on to the lung and cause a lung attack known as a pulmonary embolus. The clot may follow a different path and go through the hole in the atrial wall and exit into the left atrium. From there it can travel to the left ventricle and then on to the brain to cause a stroke. The clots may also go to other vital organs via the arterial system.

In some cases it might be beneficial to close the hole between the two sides of the heart.

PFO’s are diagnosed with an ultrasound of the heart called an echocardiogram. Often, a Transesophageal Echo (TEE) is needed to visualize the PFO. The ultrasound signals from a normal echocardiogram must traverse skin, muscle, lung and other tissues before the wall between the atria is reached. This can degrade the signal and make it more difficult to visualize the affected structures. The esophagus is right behind the heart. Inserting an Echo probe into the esophagus places the probe in close proximity to the heart. The signals do not have to pass through many tissues and body structures. The wall between the atria, called the septum, is seen quite clearly with TEE. The technician may inject agitated saline bubbles through an IV line placed in the arm to see if any bubbles pass through the hole in the heart. If they do then the hole is there and consideration must be given to fixing it if one already had a stroke or transient ischemic attack.

HOW IS A PFO CLOSURE DONE?

The procedure is done in the cardiac catheterization lab with fluoroscopic guidance. Two introducer catheters are inserted into the femoral vein, in the area of the groin. An intra-cardiac echo probe is placed through one introducer catheter. It is used to visualize the hole in the septum with ultrasound. A wire is passed through the hole in the atrial septum into the left atrium. The delivery catheter is advanced over the wire into the left atrium.  A disc made out of thin sail-like material is formed in the left atrium and pulled up against the septal wall. Then a right atrial disc is formed. The device is locked into place and the catheter is removed from the body.

WHAT RISKS ARE ASSOCIATED WITH PFO CLOSURE?

The risks are few and not common. As the catheters are introduced into a major vessel, bleeding is one of the risks. Other risks include embolization of the device, perforation of the heart and infection. The most common complication (about 3-5% of patients) is temporary irregular heart rhythm (as the device is touching the wall of the atrium it may cause atrial fibrillation). This resolves as the closure device becomes part of the septal wall.